How to import Actuals into Visual Cash Focus

In the Universal import option, the Specifications button gives the structure of the import file for Actuals.

Tip: The easiest way to see the required structure of an import file is to open an existing model that has actuals, and export the Actual data.The file that is created can be used as an example for the import file: change some of the amounts and then import the same file back into the model. You will see that the model now contains the imported actuals.

The import file needs only three pieces of information: the account number, the period and the actual amount.

a) The import file is an ASCII file:

Period number: The second figure is the period number. This can be -1 or less. If duplicate period numbers are specified for the same account number, only the last one in the file is used.

Additional feature is available in these editions: Corporate, Enterprise

How Move some accounts works

You can set up a schedule of accounts to move.

If “Move some accounts during import” is checked:During the importing of actuals, the balances in selected accounts will be moved (i.e. transferred) to other accounts.

Any amounts in duplicate account numbers will be added.

On the Import /export options page, check: Move some accounts during import.

Click Enter schedule to create the schedule of accounts that are to be moved. Here is an example: 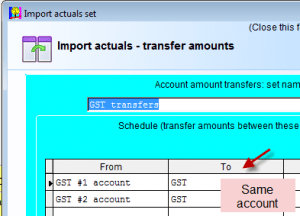 The Info buttons on the page explain how to use this module. In the example above, it shows how several GST accounts in the firms books can be consolidated and transferred into the Visual Cash Focus GST account. After closing the Import actuals set, select the appropriate schedule to use.

Now import the actuals file in the usual way. If Move some accounts during import is checked, then not only will the actual amounts be imported, but also the amounts will be automatically transferred to the accounts in your schedule.